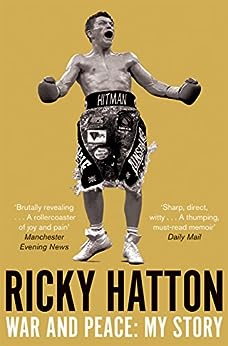 On 24 November 2012, four-time World Champion boxer Ricky Hatton dropped to his knees, felled by a sickening punch to the body in his first comeback fight in almost three years. Gasping for breath, down and out, it was then that something extraordinary happened: 20,000 fans began to sing his name. Ricky Hatton: War and Peace is the story of one of British boxing’s true icons. From a Manchester council estate to the bright lights of Las Vegas, Ricky Hatton experienced incredible highs in his career, including one of the greatest ever wins by a British boxer, over the IBF Light Welterweight champion Kostya Tszyu. But heavy defeats to two legends of the ring, Floyd Mayweather and Manny Pacquiao, brought him quickly down to earth to face a new set of battles against depression, drink and drugs. Written with his trademark honesty and wit, this is the inspiring story of a charismatic, funny, straight-talking fighter who boxing fans have always taken to their hearts; a man who has survived a lifetime of wars both in and out of the ring, and who only now is finding something close to peace.