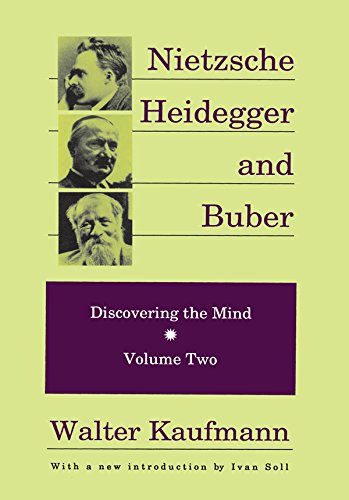 In this second volume of a trilogy that represents a landmark contribution to philosophy, psychology, and intellectual history, Walter Kaufmann has selected three seminal figures of the modem period who have radically altered our understanding of what it is to be human. His interpretations of Nietzsche, Heidegger, and Buber are lively, accessible, and penetrating, and in the best scholarly tradition they challenge and revise accepted views.After an introductory chapter on Kierkegaard and Schopenhauer, with particular attention to the former's views on despair and the latter's on insanity and repression, Kaufmann argues that Nietzsche was the first great depth psychologist and shows how he revolutionized human self-understanding. Nietzsche's psychology, including his fascinating psychology of masks, is discussed fully and expertly.Heidegger's version of existentialism is herein subjected to a devastating attack. After criticizing it, Kaufmann shows how the same mentality finds expression in Heidegger's philosophy and in his now-infamous pro-Nazi writings. Here, as in his portraits of other major thinkers, the author's concern is to show that his subjects are of one piece.