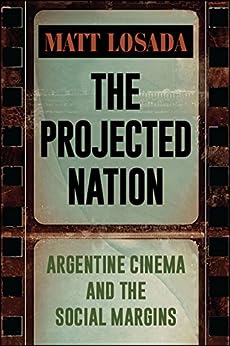 Investigates how Argentine cinema has represented rural spaces and urban margins from the 1910s to the present.The Projected Nation examines the representation of rural spaces and urban margins in Argentine cinema from the 1910s to the present. The literary and visual culture of the nineteenth and early-twentieth centuries formulated a spatial imaginary—often articulated as an opposition between civilization and barbarism, or its inversion—into which the cinema intervened. As the twentieth century progressed, the new medium integrated these ideas with its own images in various ways. At times cinema limited itself to reproducing inherited representations that reassure the viewer that all is well in the nation, while at others it powerfully reformulated them by filming spaces and peoples previously excluded from the national culture and left behind in the nation’s modernizing process. Matt Losada accounts for historical events, technological factors, and the politics of film form and viewing in assessing a selection of works ranging from mass-marketed cinema to the political avant-garde, and from the canonical to the nearly unknown.Matt Losada is Assistant Professor of Hispanic Studies at the University of Kentucky.